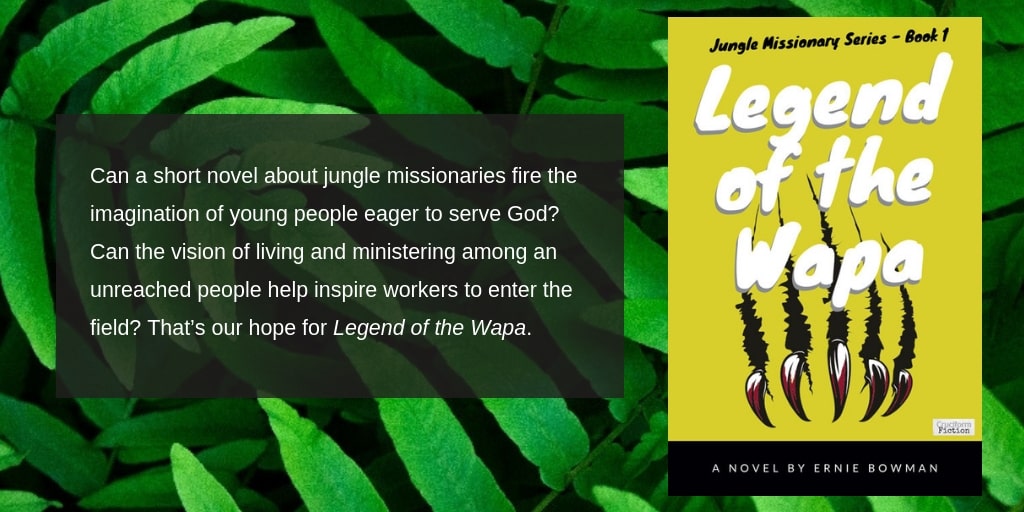 “Buy it,” is the easy and obvious answer, but I’m hoping for more than that. I’m hoping you will allow it to motivate you to be more involved in foreign missions, either by direct participation, financial support, or prayer. And I hope that you’ll give it to a young person (or more than one) for those same purposes.

I believe the book—just released today—will thrill and entertain everyone who reads it, at least, but I am praying especially that God will use the book to make missionaries out of teenagers.

The Good and the Bad

I’ve spent the last twelve years working in youth ministries of one sort or another, and I’ve heard a lot of negative talk about today’s young people. Unfortunately, some of it is true. I could tell you stories all day that would fit the preconceived opinion a lot of adults have about “kids these days.”

I can also tell you positive stories that will knock your socks off. I can tell you about kids who love their Lord more than popularity. Teens who read their Bible every day put most grownups to shame in the devotion department. I can tell you about the piety and spiritual fervency of today’s American Christian youth.

The sad thing is that a lot of the others are simply living down to the expectations set for them. When parents, pastors, and youth leaders are content with mostly well-behaved teens who make it through high school without getting pregnant or high, that’s the bar they’ll strive for.

I hope you’ll expect more from them.

My expectations for teens changed when I spent a week in an immersive tribal-missions experience. I took a group of high-school students through the Wayumi Expedition program at Ethnos360 in Jersey Shore, Pennsylvania. For a whole week we were put through our tribal missions paces, and I watched teens demonstrate a capacity for language acquisition that would rival any seminary student. I watched them navigate the barriers of culture and custom as they adapted to new situations with ease. I listened as they talked of a desire to serve God and I saw recognition dawn as they realized that tribal missionaries aren’t supermen or myths.

In Celebration of Christian Heroes

In Legend of the Wapa, you’ll meet Ian and Rachael Allen. He is the leader of a tribal missionary team at work in the Venezuelan jungle. Ian and his team aim to pierce the heart of darkness and reach the previously unreached Kilo people with the light of the gospel of Jesus Christ.

Ian, along with the Kilo people, is fictional, but he was inspired by real-life gospel heroes. Young men and young women who are living out the declaration of William Wilberforce and his co-worker William Pitt:
“We are too young to know that certain things are impossible. So we will do them anyway!”

If I told a group of established adults everything that was involved in reaching an unreached tribe with the gospel and challenged them to drop everything and go do it, that tribe would probably stay unreached. But when it’s laid out in front of a group of sufficiently motivated teens, the response is often “Challenge accepted!” and “Game on!”

Getting Missions on the Radar

The difficulty I have found is that tribal missions isn’t even on the radar of most teens (or their parents!). Not because they don’t care, but because they don’t know about it. I came home from that week of training and I started to look around for a book or a novel or something I could put into the hands of kids and teens and say: “Here – read this! You would be great at this!”

No one was writing fiction about tribal missions.

So I sat down to write one myself and Ian Allen was born.

However, I can also tell you from long experience that if you tell a teenager about a great book you read and then tell them to read it, there is a zero percent chance they will go out and buy it for themselves. They’ll be polite and they’ll listen and they’ll nod along as you talk, but they will end up the same way they began the conversation: bookless.

I have found far greater success when I tell a teen about a book and then hand it to them and say: “Here, I bought this for you.” You will be surprised how often they will not only read the book when you do that, but take it seriously too!

A Mobilizing Force for Gospel Missions

What I hope you’ll do with my book is I hope you’ll buy two copies: one for yourself and one for a teenager or other young person. I want the adventures of Ian Allen and his team to be a mobilizing force for gospel missions. You may never go and fill Ian’s fictional shoes yourself, but what if there’s a kid who will only need a gentle push from you to get started? What if that gentle push could come in the form of a novel?

Plenty of boys wanted to be detectives after reading The Hardy Boys books and innumerable lawyers were born from the pages of a John Grisham legal thriller. Why can’t we do the same with missionaries?

That’s the goal, but I can’t do it on my own because I only know so many kids and teens. What I’m hoping you do with my book is buy it, read it, and buy a second one to give away. Be more than a reader—be a mobilizer for missions, and let’s make some missionaries together!

Ernie Bowman is the Associate Pastor of Calvary Baptist Church in Ypsilanti, Michigan. Also a part-time Bible teacher and writer, he blogs regularly at www.thefoolish1.com about living for Jesus, church life, books, and education.