Posted on May 4, 2016May 31, 2022 by Bob Bevington — Leave a comment
Categories: Bridges on Providence, Jerry Bridges 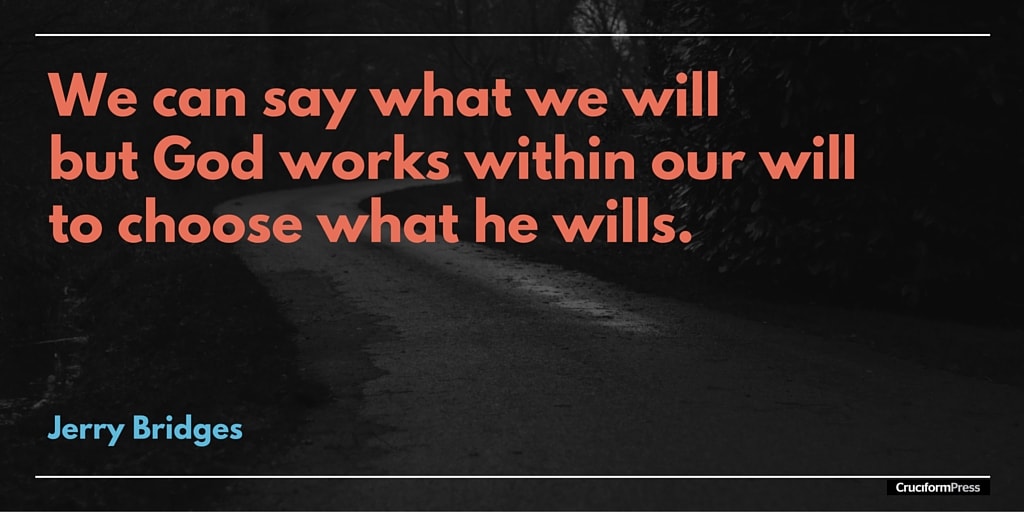 Read all the posts published to date in this 9-part series on God’s providence from Cruciform’s good friend, the late Jerry Bridges. This was a teaching Jerry was presenting in the months leading up to his fatal heart attack in March, 2016.

Providence and Free Will

God is sovereign even though he has allowed—to a limited extent—humans to also have their own will. In order to understand how this works we need to remember that God does what we cannot do. We can request, persuade, coerce, or manipulate people’s wills, but all of our efforts are external. God, on the other hand, works within our will so that we choose to do what He has determined we will do.

Here is a prime example of this from Scripture:

And I will give this people favor in the sight of the Egyptians; and when you go, you shall not go empty, but each woman shall ask of her neighbor, and any woman who lives in her house, for silver and gold jewelry, and for clothing. You shall put them on your sons and on your daughters. So you shall plunder the Egyptians. –Exodus 3:21-22 (also see 12:35-36)

From the point of view of the Egyptian women, they freely gave their jewelry and clothing to the Israeli women. But God was behind the scenes giving them favor in the sight of the Egyptians. God did this way back then, but He also does it today. He does this at the level of people’s motivations. For example, in this passage He prevents people from coveting:

Here are three more verses that provide insight on this subject:

Who has spoken and it comes to pass, unless the Lord has commanded it? –Lamentations 3:37

Is it not from the mouth of the Most High that good and bad come? –Lamentations 3:38

I form light and create darkness, I make well-being and create calamity, I am the Lord, who does all these things. –Isaiah 45:7[tweet “God is sovereign – even at the level of our motivations, working within our free will.”]

These verses make it very clear that the Lord is in control. Humans can say what they will, they can exert all their efforts, but ultimately God is in control of all things. When He speaks, it always happens—no matter what we say, do, or think. He always works within our will to work his own will; He is God.

God is infinite in His power, but as we will see in the remaining posts, His power is always guided by His infinite wisdom and goodness.