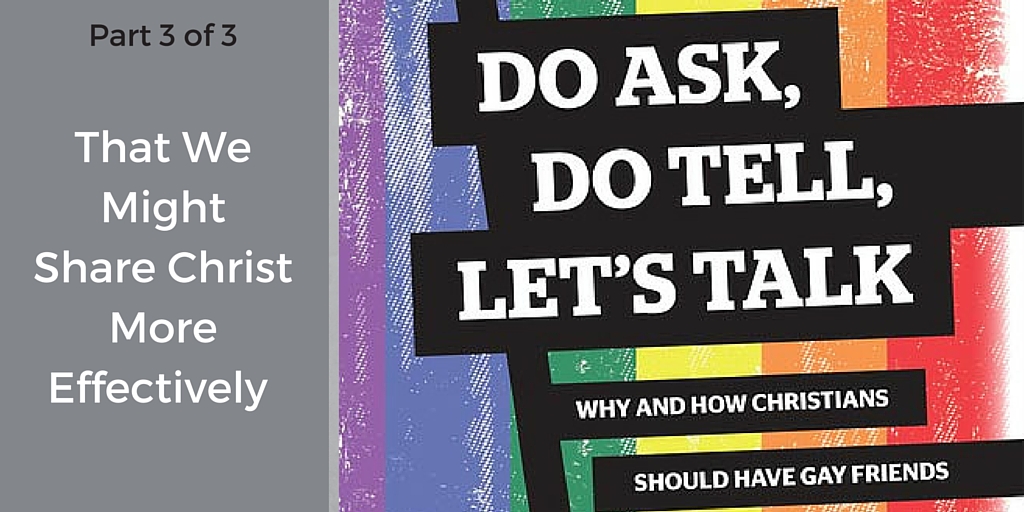 As stigmatizing and offensive as a church’s silence can be when it comes to SSA, much of evangelicalism has adopted an unspoken “Don’t Ask, Don’t Tell” policy. The result has been decades of silence in untold thousands of churches; silence compounded by confusion, isolation, and alienation.

Consider this from the perspective of an individual in a local church who experiences SSA. For years this person has seen personal struggles of many kinds being addressed in the church, and care offered to those who struggle. Yet the only time his or her greatest area of struggle is mentioned is in jokes or as an example of an adversarial cultural agenda. Eventually he concludes, “This is not a safe place for me.”

(Is it? Should it be? Does God want the local church be a safe place for people to be honest about their struggles?)

Then, should this person find in the gay community the voice that the church community never gave him (or her) room to express, he gets very excited and feels liberated—and we get offended by his celebratory tone. It’s true: to the extent he is openly celebrating sin, that’s wrong. But at one level how can we blame him for shouting? He had been silenced for years and now he isn’t. It’s a bit like blaming a lame person for dancing when one day he can finally walk.

I hope you can begin to see that this is not a political book. It’s a friendship book. However God may want to use governing officials and political policies to shape our country, can we agree that he wants to use his church to reach people? That is what the opening three paragraphs of Do Ask, Do Tell, Let’s Talk emphasize:

Conversations on controversial issues do not to go well when the dialogue happens community-to-community or figurehead-to-figurehead. Whether it’s race, religion, or politics, groups don’t talk well with groups. Too much is at stake when we feel like our words and actions speak for the collective whole.

Two individuals from those respective groups are much more likely to forge a good relationship, influencing one another in various ways. Unfortunately, someone who listens well is often viewed by his or her compatriots as engaging in compromise; at the group level, representing each side fairly feels too much like agreement.

That is why the aim of this book is friendship. Friendship is the level at which influence can be had, because the dialogue does not seek to represent an agenda but to understand a person. Friendship is what protects good points from becoming gotcha moments.

It has been my experience that the church is much more willing and equipped to engage most other populations with the gospel (such as Muslims, atheists, addicts, prisoners, and so on) than we are those who experience same-sex attraction. This creates a problem. As Mark Yarhouse has written, “In fact, we may inadvertently push people toward the mainstream gay community precisely because we share the same tendency to reduce complexity to culture war. We appear to prefer politics to pastoral care.”[tweet “Muslims, atheists, addicts & prisoners get church care. And those with same-sex attraction?”]