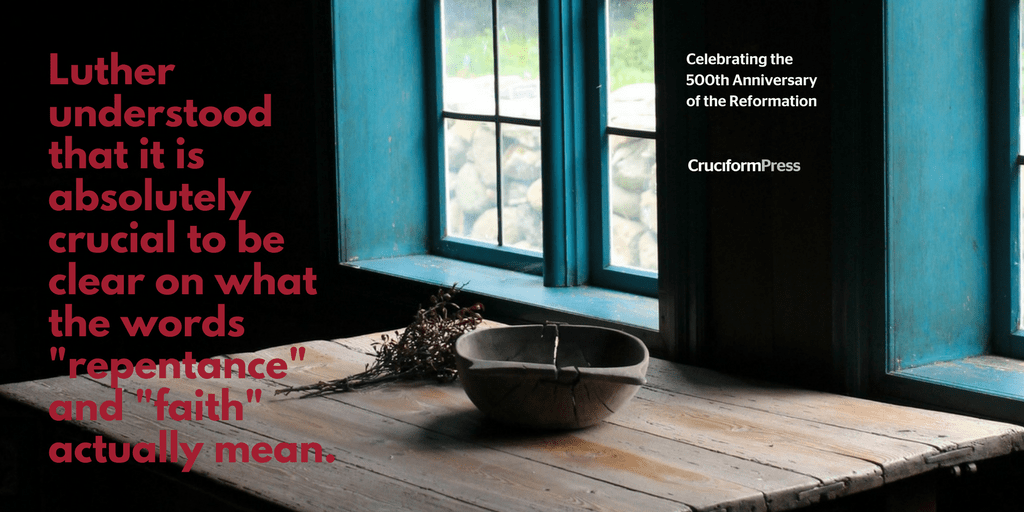 Roland Bainton, a twentieth-century church historian, notes that this erroneous system of penance had its roots in Jerome’s mistranslation of a Greek word in the Latin Vulgate. In his translation of Matthew 4:17, NASB (“Repent, for the kingdom of heaven is at hand”), Jerome translated the Greek word as “do penance” rather than “to be penitent.” Luther called the correcting of this error a “glowing” discovery.[i] He pointed out the folly of Rome’s false system and the uncertain state of forgiveness it yielded. How could a sinner know if he was contrite enough or if he had made sufficient confession? The Smalcald Articles state,

Each person had to enumerate all of his or her sins (which is impossible). This was a great torment. Whatever the person had forgotten was forgiven only on the condition that when it was remembered it had to be confessed. Under these circumstances people could never know whether they had confessed perfectly enough or whether confession would ever end.[ii]

According to the practice of penance, a sufficient work and sacrifice needed to be made in order for the penalty of sin to be satisfied. Of course, such satisfaction was also ambiguous: how much sacrifice was sufficient for full satisfaction? The notion of satisfaction added to the perfect and finished work of Christ on the cross.

Repentance. Against this introspection, Luther understood the biblical word for “repent” to simply mean “a change of mind.” Specifically, it meant to change one’s mind about the entirety of his life—that he has no righteousness to offer before God. He wrote, “[Repentance] simply lumps everything together and says, ‘Everything is pure sin with us. [Why] would we want to spend so much time investigating, dissecting, or distinguishing [individual sins, as is done in penance]?’”[iii]

To repent is simply to see that nothing good dwells in our hearts and to therefore look entirely outside of ourselves to the Savior. How can we ever “scrape the bottom of the barrel” of our sinfulness and sinful motives? Any attempt to understand and analyze our sin is never-ending (cf. Jeremiah 17:9, and Psalm 51:3–5).

We must admit we are depraved and then take our condition to the cross. This brings assurance and frees us from introspective attempts to plumb the depths of our sin and our motives. It also gives all glory to God, for in this definition we cannot offer a single good work toward our salvation, and we see God’s abundant and free grace in forgiving.

Faith. Concerning the word faith, Luther said it was diametrically opposed to any work. Rather, faith was reliance on the gospel promise, trusting in the person and work of Christ. For Luther, faith was not a vague “faith in God,” or a merely generic faith in the Bible, but a specific trust that holds Jesus as its sole object.

In his sermon on the Syrophoenician woman (Matthew 15:21–28), Luther described faith as, “a hearty trust in the grace and goodness of God as experienced and revealed through his Word.”[iv] Faith, for Luther, was a clinging to Christ and the promises of the gospel, a resting in Christ and not in one’s own works. He understood faith as confidence that God is good and true to his promise of grace to those who believe.

Our reason says we should give works to God. Faith teaches that we cannot give works but must trust Christ alone. Such trust in the goodness of God goes against what we naturally perceive or reason to be true. Our circumstances may seem to affirm that God hates us, but faith clings to the pure, objective Word of God and his promise of grace in spite of what the world, our own heart and reason, or the devil might say.

The Roman Catholic view of faith in the sixteenth century defined it as trust and obedience (works). The Church stated that faith could not be raw trust that stood alone apart from works, but rather that faith had to produce works, and that these works themselves would justify man before God. This “justifying faith,” as Rome termed it, was faith forming itself by love—that is, love for God and love for one’s neighbor.

This view ultimately turned faith into obedience to the law, rather than simple trust in Christ alone. Luther rejected this concept of justifying faith. He believed it would cause man to seek justification by works of the law once again, looking to be justified not through trust alone, but by his love for God and neighbor. In his commentary on Galatians 2:16, Luther warned against the teaching that faith only justified someone when love and good works are added to it.

Two terms taught by the Church of Luther’s day—congruity and condignity—help to further explain Rome’s view of faith that Luther encountered. Though we may be unfamiliar with these terms today, the errors of congruity and condignity have their subtle echo in some present-day Protestant thinking, eroding the truth of faith in Christ.

If a person was outside a state of grace and in what the Church called mortal sin (a category of sin that utterly damns a person and is unforgivable),[v] he could do a work of congruity (for example, give alms or hear the Mass) whereby he would receive spiritual strength to do good works of condignity. These works of condignity were actual good works done with God’s help that earned eternal life.

Such teaching made trust in Christ and his death on the cross unnecessary. It emerged from a high view of man’s ability and a shallow view of sin and depravity (and thus a low view of God’s holiness).

By contrast, Luther realized that one’s best works—even works done by grace—are full of deeply rooted sin and impurity. He saw that when a man became convinced of the depth of his sin and depravity, he would conclude that he has absolutely no good works to offer a holy God. Even with the Holy Spirit’s help in producing works within a person, man could still not be justified by these works, for even these works were tainted with sin.

In addition to combating the concepts of condignity and congruity, Luther’s definition of faith and his belief in the sufficiency of faith alone confronted one other aspect of Catholicism: the teaching that the Mass had the power to grant forgiveness. “The sacraments, especially the Mass, were the central piece in the piety of the late medieval church. Through them the church transmitted the grace of God to sinners and turned their partial confessions, partial good works, and partial faith into deeds that were truly pleasing to God.”[vi]

Against all this, Luther taught a simple trust in Jesus Christ alone—without any work whatsoever from man. In other words, faith does not involve any reliance upon ourselves at all. Rather, it is a raw, bare, and simple trust in the promises of God as found in the gospel message.

This biblical understanding of repentance and faith that Luther treasured and taught was key to his understanding of the gospel. He found inexpressible joy in the gospel as a result. As quoted earlier, “If you have a true faith that Christ is your Saviour, then at once you have a gracious God, for faith leads you in and opens up God’s heart and will, that you should see pure grace and overflowing love.”[vii]

Such biblical faith and repentance meant that man was unable to offer God any personal righteousness or to add any merit to the work of Christ. Man, in fact, was so dead in sins that even faith and repentance had to be given to man as an undeserved, gracious gift from God. Man was unable to believe, bound in his will, requiring the work of a gracious Savior. These facts, which we will discuss more in the following posts, were the foundation of Luther’s understanding of the gospel.

Part 13 of an extended series drawn from A World Upside Down: The Life and Theology of Martin Luther, by Charles E. Fry.

[v] The Roman Catholic Church placed sins in one of two categories: 1. Mortal sin (mentioned above) or 2. Venial sin, which could be forgiven by works of merit.

1 thought on “Luther on Repentance and Faith”